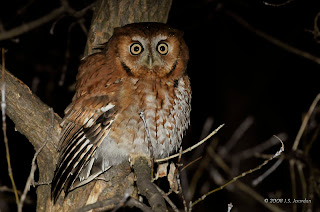 Awake at 3 am! Dressed for the forecasted sleet, rain, clouds and wind, and out the door to participate in the National Audubon Society's 109th Christmas Bird Count. First stop, however, is Pt. Mouillee to try out my 'owling' camera.

I had velcroed a fisherman's flashlight to the top of my Sigma 400 mm f/5.6 APO lens with the idea of illuminating an owl in the dark enough to focus and photograph using the Nikon D300 and SB800 flash w/ a Better Beamer attachment. Stopping along Roberts Rd. at Pt. Mouillee I quickly called in a pair of Screech Owls. Unfortunately, my flashlight was too dim to see any owls, and they flew off before I could spot them. So, I decided to stop at a gas station and pick up a pair of batteries for my regular flashlight and use it. 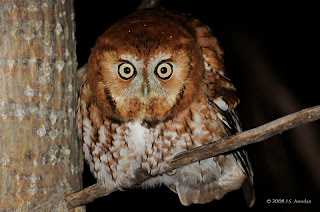 Stopping at Sterling State Park in Monroe (Area 6 in the Monroe count circle) I drove down to the woods next to the boat launch. No sooner had I stepped out of the car did the rains come. After a few minutes of getting wet and not hearing any owls, I got back into the car to have a cup of coffee. At about 5:30 am the rain/sleet let up enough for me to get back out and try again. A quick play of the BirdJam brought an immediate response from a Screech Owl. Grabbing the camera and flashlight I continued calling the bird in using my impression. The cloudy skies were bright enough for me to see a shadow sail over my head and land in a tree about 15 feet away. Placing the flashlight between my legs I focused the beam on a lovely red-phased bird and got a quick couple of images w/ the camera and flash! The little owl stayed put for only a moment and flew to another branch, then to a stump, across the road into the phragmites, back into the trees, and back to a nearby stump. Each time I managed to see it but was too slow to get the camera on it. Finally, I was able to capture a couple frames with the flash set to repeat mode (RPT at 1/8 power, 1/320 sec. at ISO 800). Satisfied, I quickly left the little guy be and got back into the car. Excellent start to the day! 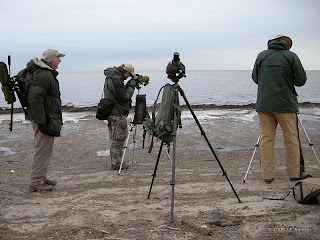 At 7 am I met up w/ Will Weber and Allen Chartier at the Whiting Plant (Area 2). We parked down near the beach and headed down to the shoreline bordering the Consumers Energy Plant. It was still too dark to see anything, and the Lady of the Lakes woods were now fenced-in and locked, so we waited for Mike Sefton to arrive. As light began to increase we quickly saw hundreds of Ring-billed Gulls and dozens of Great Black-backed Gulls flying and swimming in the rough Lake Erie waters. I grabbed a quick photo of the guys for posterity. Except for a few Mallard, and the occasional Lesser Scaup, Hooded Merganser, or Bufflehead we saw no ducks. A lone deer hunter farther down the shoreline scared up the flocks of gulls, so we headed up to the service road above the disharge canal.
Walking along the service drive we managed a Carolina Wren, Downy Woodpecker, Northern Cardinal and Tree Sparrow, but passerines were visibly absent. Will managed a lone Ring-necked Pheasant as we walked the mowed fields while the rest of us dipped. We finally found a couple of Winter Wrens and several Golden-crowned Kinglets, but not before scaring up a hundred or so Great Blue Herons. On one of the inland ponds we spotted a pair of Lesser Black-backed Gulls, a Red-tailed Hawk, and a fly-over Bald Eagle.
Returning to the beach we spotted a small raft of Gadwall, Goldeneye, and Common Mergansers. The fenced-in discharge canal held several Black-crowned Night Herons, a Belted Kingfisher, and more Winter Wrens. Saying my good-byes, I left the guys and headed back to the car for lunch w/ Robin and an afternoon at the Monroe Power Plant. I stopped along the beach just long enough to attempt a digiscoped image of one of the immature GBB Gulls. 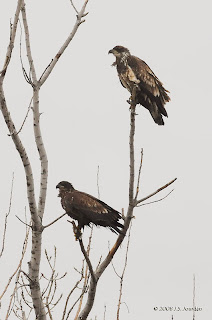 I arrived at the foot of Front Street (Area 5a) a few minutes before noon and found a flock of 20 Hooded Mergansers in the creek north of the power plant. A scan of the discharge canal yielded a Great Egret near the bridge, and 18 Bald Eagles (13 adults) in the trees between the bridge and the trestle farther downstream. As the egret flew off I snapped a few pics for record, and headed back to meet w/ Tim Walsh and Matt Shackelford. 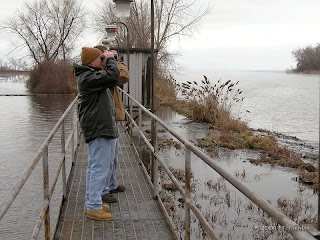 We headed down the canal and promptly spotted another 9 Great Egrets, dozens of Great Blue Herons, and more eagles. This time 18 immature and 8 adults. Included were the first of many Double-crested Cormorants. And don't forget the Ring-billed Gulls! Between the discharge canal and the coal piles we tallied hundreds. No Bonaparte's Gulls were seen, however, and we also dipped on white-winged gulls.
I attempted a few digiscoped images of the Great Egrets and the Bald Eagles across the canal, but rising steam and high winds made photography difficult. I only managed a few record shots. 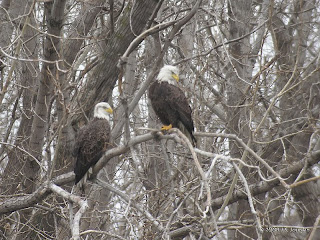 Much of the Edison property along the River Raisin was fenced in, and construction equipment kept us from stopping, but things looked pretty quiet. We saw a few more Bald Eagles in the distance. At the lakefront we stopped to check out the fish dump and count hundreds of Herring Gulls along the shoreline. A large ice drift carried dozens of Great Black-backed Gulls (80+) and 1 Lesser Black-backed Gull. Ducks were again absent. A few eagles floated on the drifts, as well. 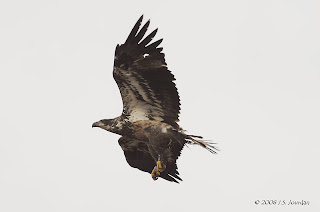 As we neared the mouth of the discharge canal we spotted a pair of immature Bald Eagles roosting in a dead snag overlooking the road ahead. Slowing the car I jumped out and got several images of one bird before and after lifting off, circling, and returning. Most of the time, however, it appeared to be a dark silhouette against the overcast and drizzling skies. We spotted several White-tailed Deer along the way, and even spotted a late-season Pied-billed Grebe swimming in the calm waters near the mouth. Another Great Egret posed nicely for a long-distance photo.
We then headed over to the Onsite to check out the fly-ash pits. Deer were plentiful over there, but passerines were unusually absent. We managed a few Blue Jays, Dark-eyed Juncos, Cardinals, and Downy Woodpeckers, but it wasn't until we got to Matt's restored, Blue-stem Grassland did we find any significant numbers of Tree Sparrows. Hundreds, in fact! As we waded into the 6-foot tall field we flushed dozens of birds, including a few American Goldfinch and the stray Song Sparrow. Afterward, I took several pictures of his field and stitched together five of them to produce this panorama:

Driving back along the west side of the discharge canal we counted hundreds of Great Blue Herons and more clusters of Bald Eagles. Out on the ice we found one group of 43 Bald Eagles, and hundreds of Tundra Swans and Canada Geese. A nice, 8-10 point buck ran along the top of the burm as we headed out and back to the power plant. Sadly, no Peregrine Falcons were seen this year at the plant.
At 5 pm we all met up the Michigan Bar & Grill to tally our results. The consensus among all was the total lack of birds today. So few passerines and ducks! However, there were some highlights from other areas: Lee Grover saw a Northern Goshawk. Cheryl Kehrer, Jan Morrow and Mollie Wood had a possible Eastern Kingbird near LaPlaisance and Knap Rd just north of Otter Creek! And 14 Great Egrets and 202 Bald Eagles were most impressive for the day! Here are totals for the entire count, including totals by individual areas. Thanks to all who participated! 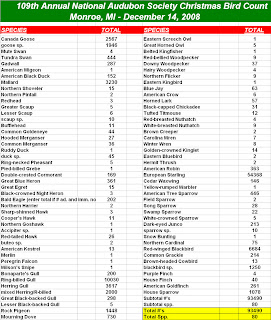 Posted by Jerry Jourdan at 5:10 AM No comments:

The Christmas bird count is getting near
All birdies will be counted, have no fear.

With binoculars and bird books in hand
We'll cover all of Monroe County's land.

It's as easy as one two three.
We'll count birds on land, in the sky, even in a tree.

Fill out your cards and give them to Jerry.
Lots of participation will make his face merry!

December 14, 2008 is the date.
Those counting owls will be first out the gate.

At the end of the day and there's no more sun
We'll meet at Michigan Bar for the count, food and fun.

Birding is really a fun sport!
To Jerry your bird numbers you must report.

So if you're a true birder with a heart
This Christmas Bird count you must take part!
--- Mollie Wood
Posted by Jerry Jourdan at 5:33 PM No comments: