On 21 December 2013 twenty-five 'very' brave souls weathered 'very' wet conditions to give the Monroe, MI Christmas Bird Count a 'very' memorable outcome.  This Snowy Owl (at left) was found and photographed by the Assenmacher family and represents the first such bird to be recorded in the count circle's 44 year history! The bird was found in the area of Dunbar Rd. and Lewis Rd. in Area 8 of the Monroe, MI count circle.  Given that this is an extraordinary 'irruption' year for Snowy Owls in the Great Lakes Region the find was not completely unexpected (but hoped for - by me).

Last Saturday (14 Dec) was supposed to be the traditional count date for the Monroe, MI CBC, but waterfowl hunting season would not end until the 15th, so it was felt that the 21st would be a better date for the CBC.  In hindsight it looked like a great decision given the fact that high winds and almost 8 inches of snow fell on the 14th, and made for a miserable start to the 114th National Audubon Society Christmas Bird Count Season.  However, a week later, we would encounter almost 2" of rainfall during a dark, overcast, rainy day that would test the mettle of birder and photographer alike. 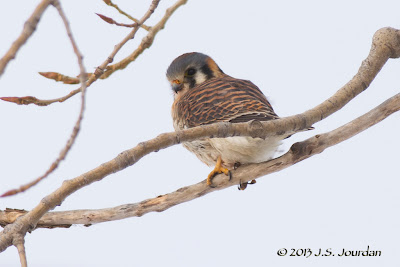 In preparation for the Monroe, MI count I did a bit of scouting last Thursday (19th). Instead of my usual morning stint at the J.R. Whiting Power Plant (Area 2 of the count circle) I would be birding Area 3 of the count circle. I spent better part of the day driving the side roads of the area looking for potential recordable birds that might not show up on the count day (like a Snowy Owl), but I would fail.  The birds that I would see (European Starlings) would ultimately be the same birds recorded on the count date.  I did, however, find a juvenile Cooper's Hawk and an American Kestrel close enough to photograph during my travels.  I would then drive over to Sterling State Park (Area 6) and find a single American Tree Sparrow to photograph.  Most of Lake Erie appeared to be frozen, and inland ponds/lakes were also frozen.  Approximately 6 - 8 inches of snow were still present on the ground. 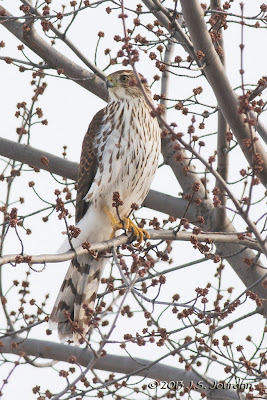 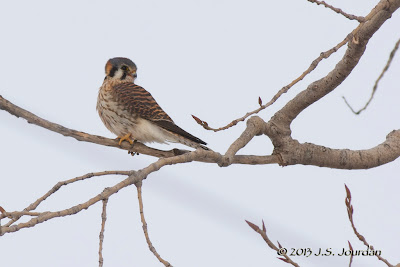 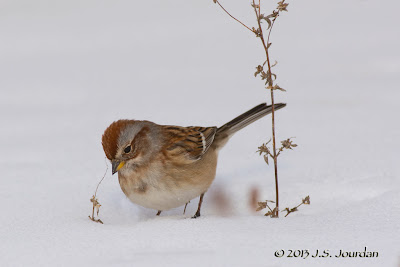 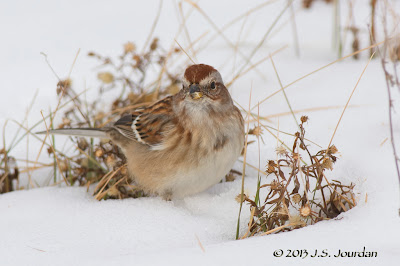 Everything changed Friday when a massive storm front moved through the central and southern US bringing high winds and heavy rains.  Here in SE Michigan we were in for a day of overcast skies and constant drizzle with temperatures in the 40's.  By Saturday the drizzle would turn into a steady rainfall that would not quit until midday Sunday. I decided to forego any owling (as did everyone else in our count circle) and just concentrate on birding during the (low) light hours of the day. 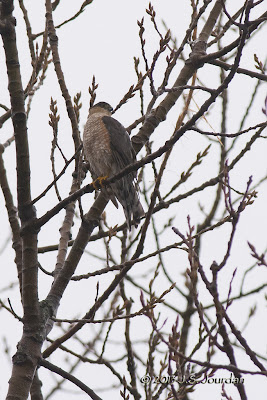 My friend Patricia Rydzewski and I spent the rainy morning hours traveling the side roads of Area 3 listening for birds (Blue Jays and House Sparrows) while counting flock after flock of European Starlings, Ring-billed Gulls, and the occasional Mourning Dove.  Our best birds would be a Sharp-shinned Hawk (left) and a pair of Cooper's Hawks.  I was praying that someone might find a Snowy Owl in their area today... 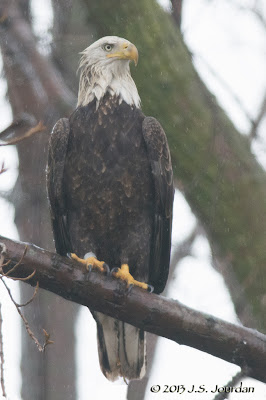 We then headed to the Monroe Power Plant at noon to survey the area with Matt Shackelford (DTE Staff Biologist), Tim Walsh, Kristen LeForce (DTE), Dan Okon (DTE) and Don Burlett.  Although the rains continued to fall, and fog was rising off of the warm-water discharge canal, we would have a much more enjoyable afternoon of birding. 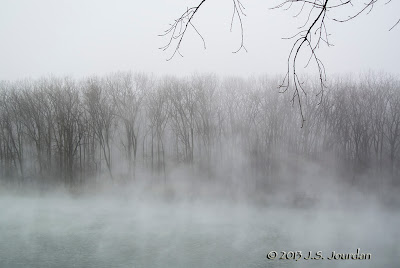 Even before we could get our camera lenses dry we had scared up a half-dozen Great Blue Herons, and had counted another dozen Bald Eagles along the shoreline of the canal.  Dense fog prevented us from seeing significant distances, but I could make out 3-dozen Double-crested Cormorants on the opposite shoreline.  Meanwhile the rest of our Fellowship (of the Rain) counted passing Bonaparte's Gulls and both adult and juvenile Bald Eagles that lined the trees on both sides of the canal. Three Belted Kingfishers were nice additions, but alas, we would not see any Great Egrets this year. Pat found a Black-crowned Night Heron near the entrance to the site. 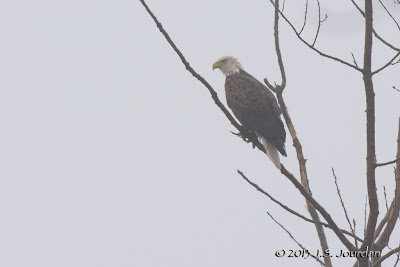 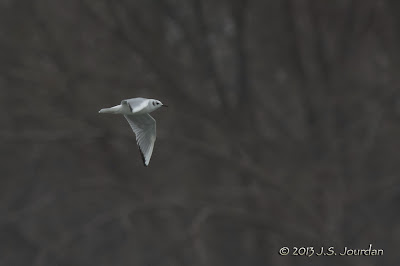 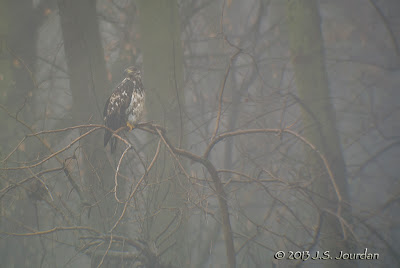 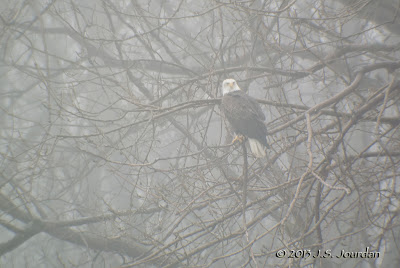 When we drove to the Raisin River side of the plant we encountered flocks of American Tree Sparrows and Dark-eyed Juncos. Pat spotted a Winter Wren while I (almost) photographed a Swamp Sparrow.  Don counted a half-dozen Hooded Mergansers in the river while more eagles and herons lined the shoreline. 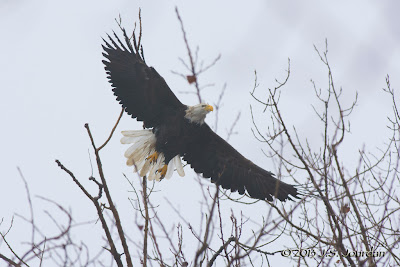 With Lake Erie frozen for a quarter mile out from shore there was relatively little action. We used spotting scopes to scan open water a few Great Black-backed Gulls, Herring Gulls, Common Goldeneye and Common Mergansers, and the occasional Bufflehead.  The resident deer population was keeping Tim alert as he drove; they were everywhere!  We attempted to photograph roosting Bald Eagles but they seemed to sense our intentions and take off almost immediately as soon as we got close enough. 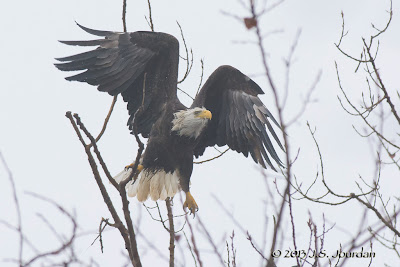 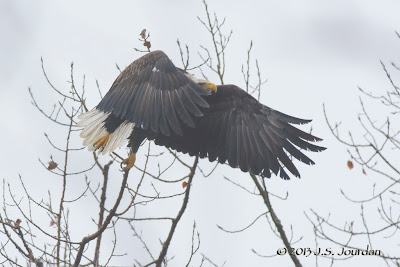 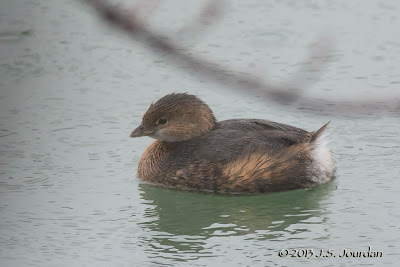 A Pied-billed Grebe was a nice surprise when we finally reached the mouth of the warm-water discharge.  More eagles, gulls and deer surprised us, as well.  It was nice to finally spot some Tundra Swans (a family of two adults and two juveniles). 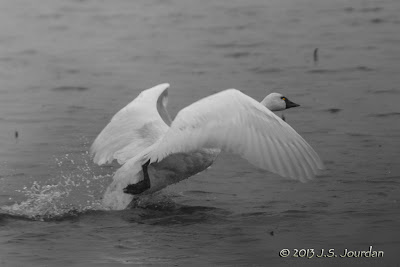 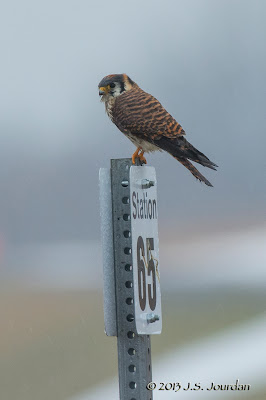 We then drove over to the fly-ash disposal onsite, where we found more deer, and the occasional American Kestrel.  It was not until we reached the lake side of the onsite that we heard the bugling of Tundra Swans.  A flock of 400 Tundra Swans were sharing the ice and open water with a couple thousand Herring Gulls, dozens of Great Black-backed Gulls, at least one Lesser Black-backed Gull (adult), Lesser Scaup, Hooded Mergansers, Bufflehead, Mallard, Black Duck and 3-dozen Bald Eagles! Unfortunately rain, fog and scoping through a fence covered in grapevine made counting extremely difficult. But, despite the fowl conditions we were very satisfied with our efforts.  Pat and I even managed to photograph a Red-tailed Hawk trying to keep dry in a tree at eye-level. It failed miserably... 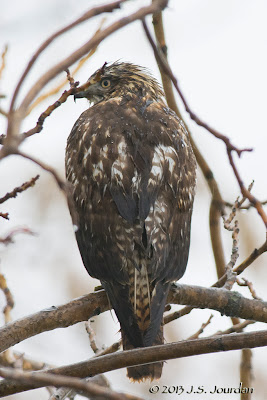 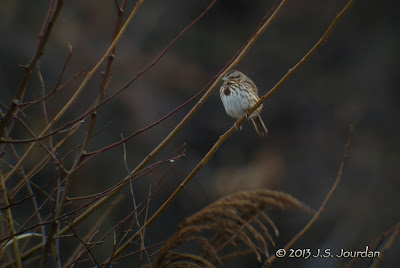 Everyone gathered at the Michigan Bar and Grill at 5 pm to tally results and share stories.  Of course, the top story was the Snowy Owl find in Area 8! Nick Assenmacher managed to get some nice photos of the owl atop the power lines next to road, and in the field after successfully catching a mouse!

Other highlights included a Horned Grebe found by Anne Smith, Dave Mendus, Jackie Copeland, Rita Montague and Karen Potts near the Port of Monroe in Area 5.  Allen Chartier, Will Weber and Mark Wloch found a pair of female White-winged Scoters in the discharge of the JR Whiting Plant.  They would also report a pair of Great Horned Owls (one chasing a Northern Harrier), a Rough-legged Hawk, and a Red-shouldered Hawk. Jack and Janet Volker also had a pair of Great Horned Owls in Area 6. Horned Larks were hard to come by, and we dipped on Snow Buntings. Only a handful of Black-capped Chickadees, Downy Woodpeckers and White-throated Sparrows were found this year.  Passerines in general were difficult to find. 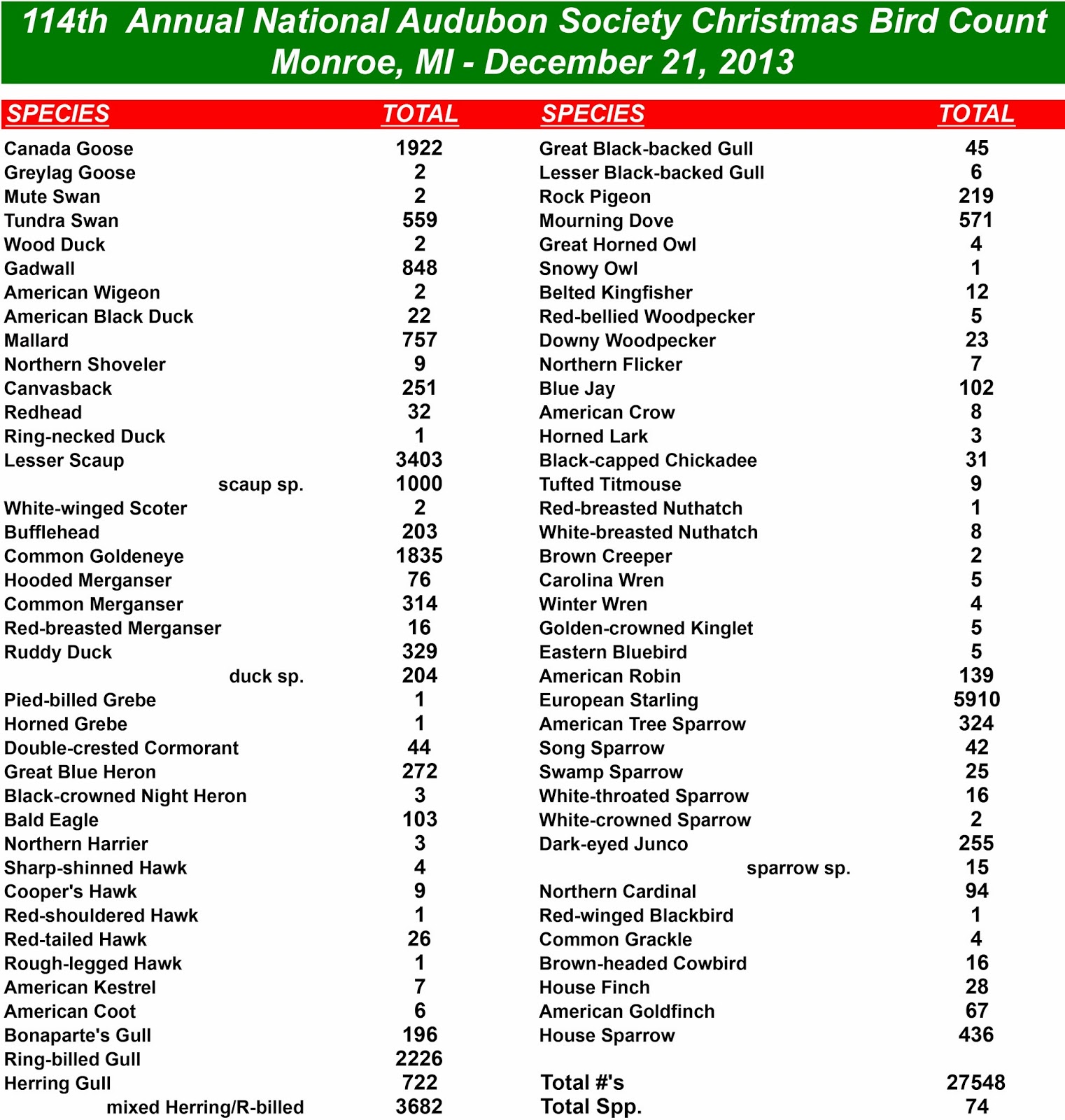 But despite the lousy weather, the 44th Monroe, MI CBC was quite a success.  I am thankful for the participation by all who were willing to get wet (soaked).  Thanks also go to the security staffs from DTE Energy, Consumers Energy, and La-Z-Boy, who allowed us access to their properties so that we could scrape up a total of 74 spp. and 27,548 total birds. Below is a tally by each area. 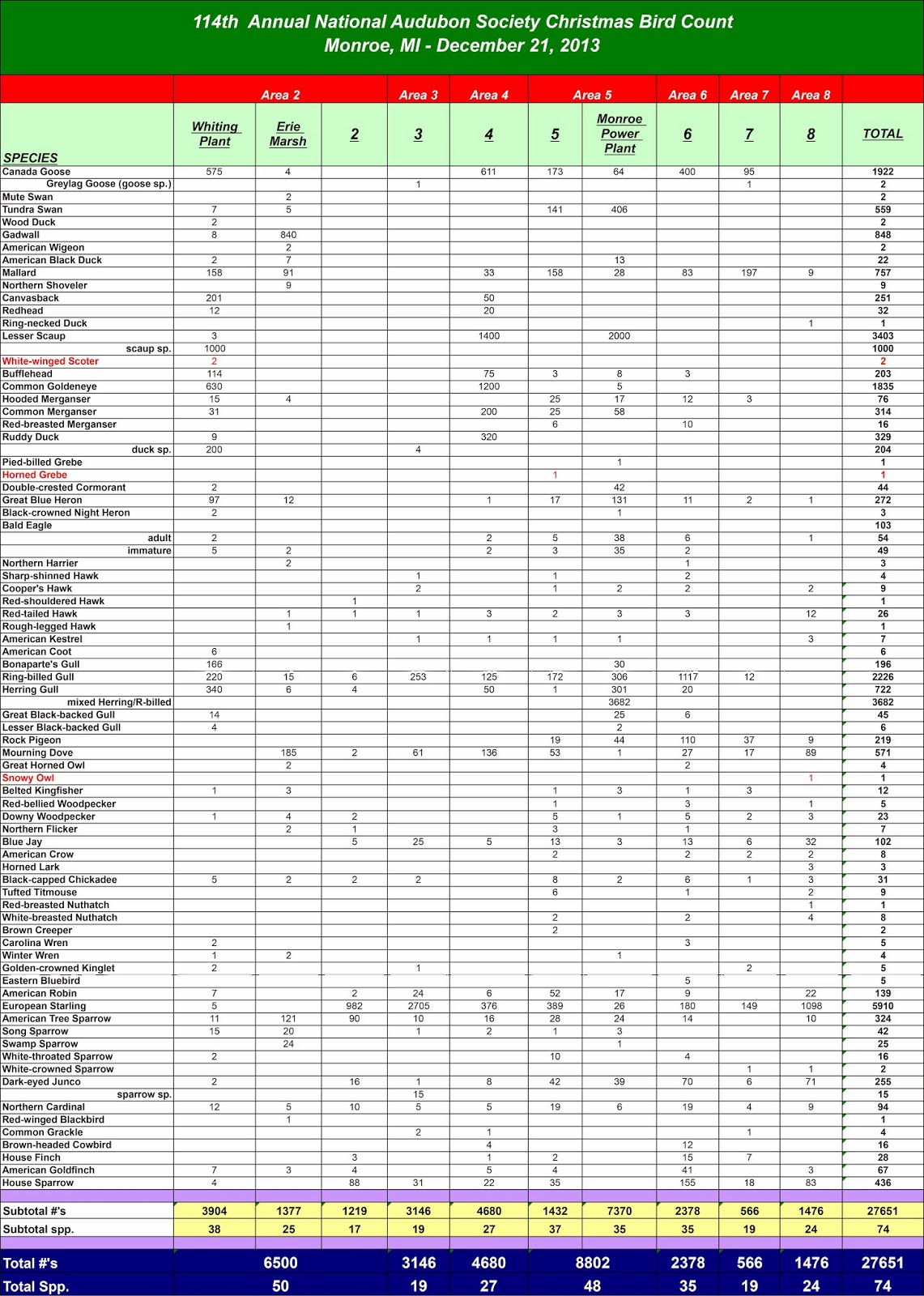 Additional photos from the day's activities can be found at Mark Wloch's blogsite. 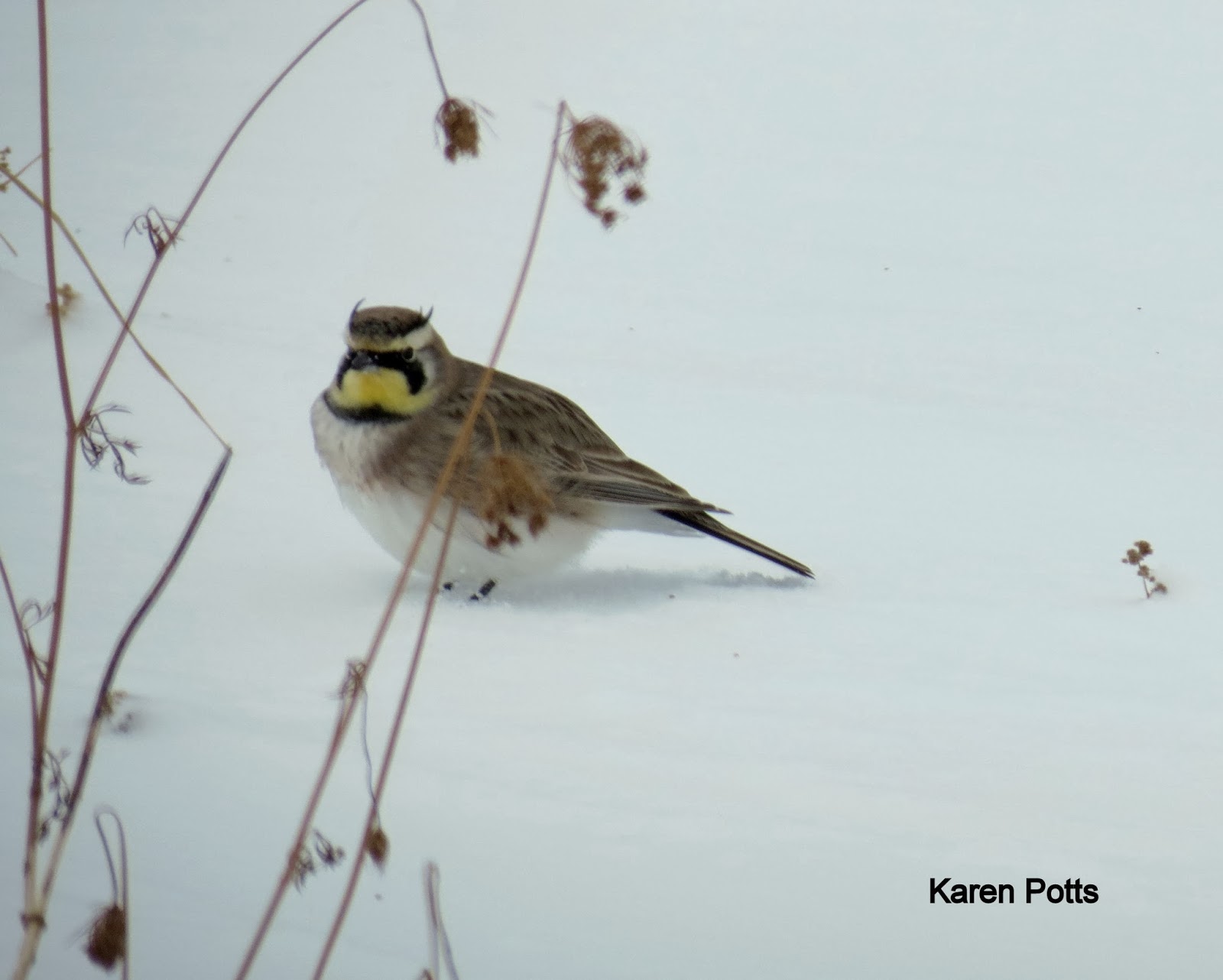 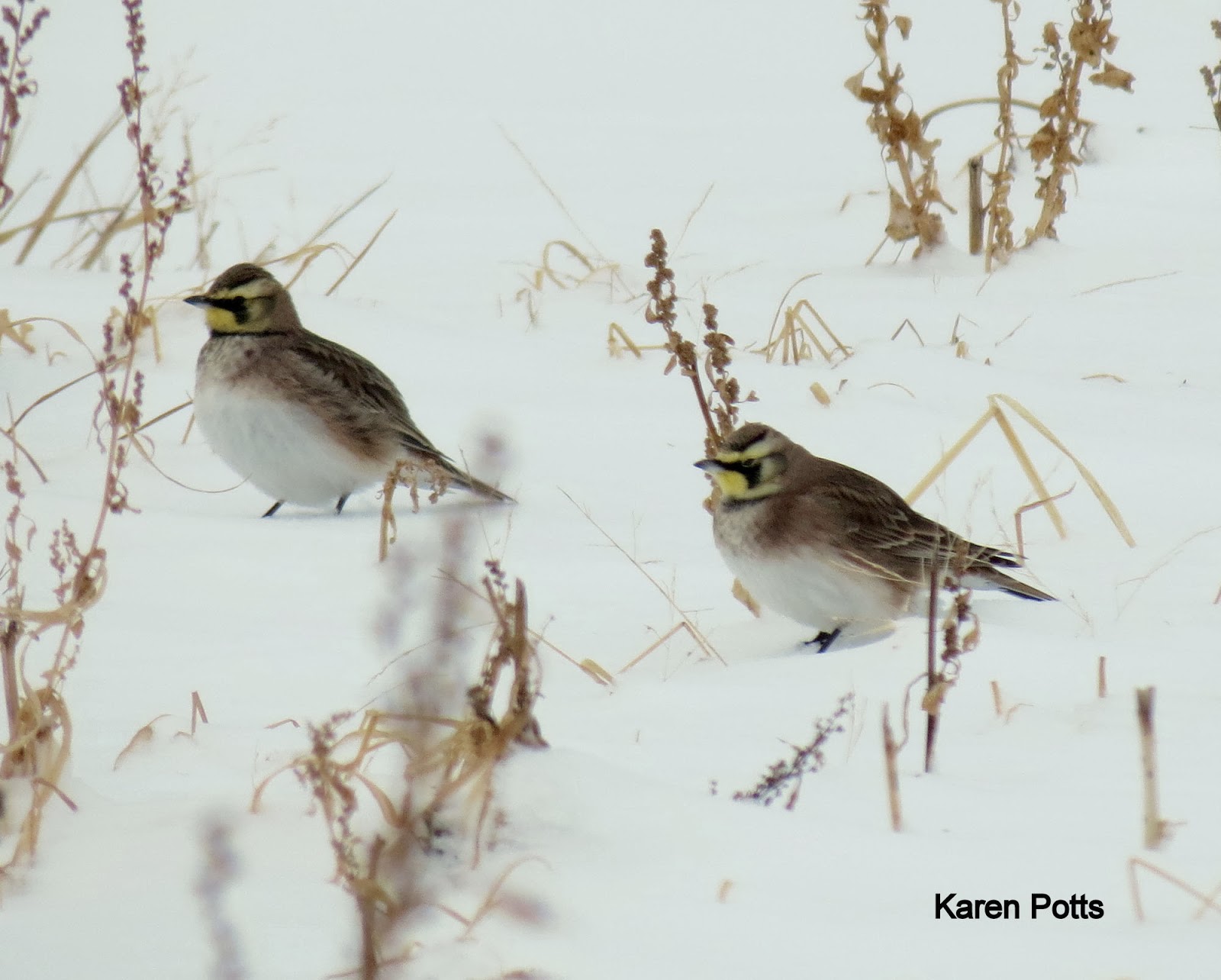 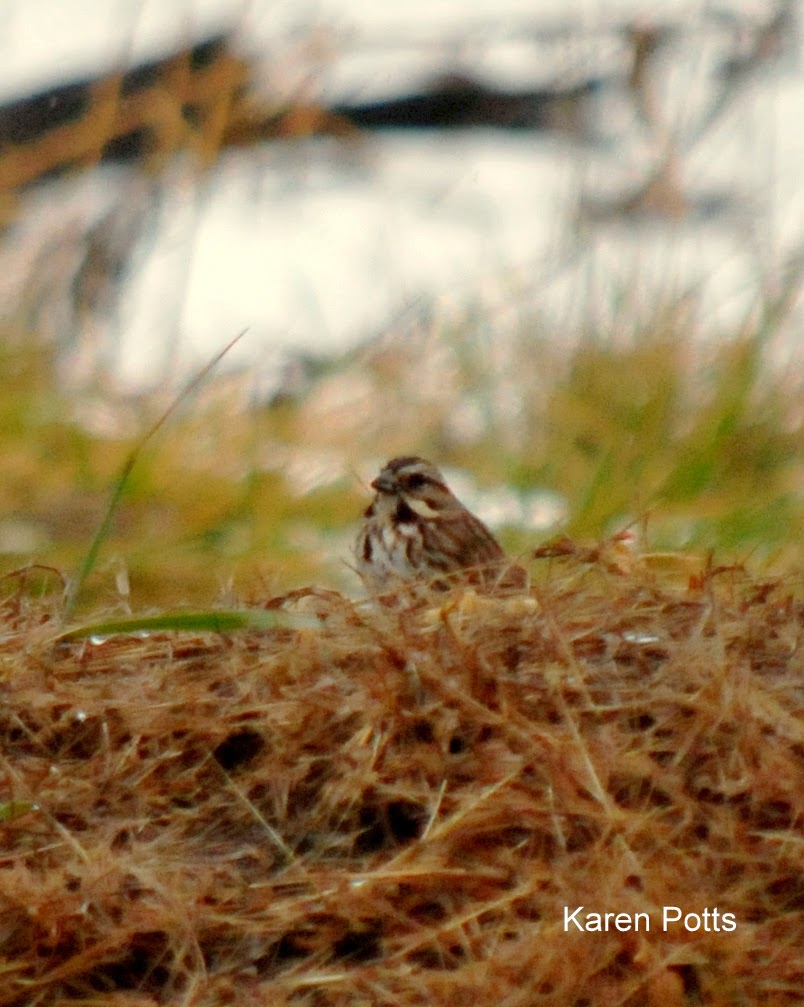 Posted by Jerry Jourdan at 6:58 PM No comments:

Saturday, December 21, 2013 is the date for the Monroe, MI Christmas Bird Count.  If the date feels a bit late, it is, kinda.  Our tradition has been to rotate the Monroe CBC between the first Saturday and Sunday during the Count Period, which occurs between 15 Dec - Jan 05 of each year.  Because last year's count was on Sunday, this year's count is on the first Saturday, or the 21st.

Remember, that the count is FREE!  There will no longer be a $5 entry fee for participants. However, there will also no longer be a 'printed' report issued by NAS.  Instead, the results will be viewable by all on the web.  Participants will have the ability to view all results and provide photos of their count day experience

If interested in participating, please contact me at jourdaj@gmail.com or jerry.jourdan@gmail.com. I will again be acting as Compiler for the Monroe, MI count circle. Details about the count can be found in the links along the right panel of the blog.

John Trapp has kindly summarized the Michigan CBC results from the entire state from last year.  His report can be found here:

The NAS Website also has a neat map of the US with every count circle and summary of last year's CBC. Click on the image at left!
You can zoom in to see all of the count circles for MI as well as the rest of the US, Canada and Central America.
Posted by Jerry Jourdan at 8:02 AM No comments: