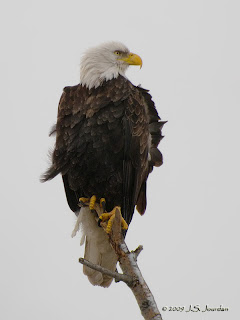 On Saturday, 19 December 2009 we conducted the NAS Christmas Bird Count in Monroe, MI. Twenty-six folks participated in the count, which netted 77 species and 91,705 birds. It snowed throughout most of the morning and later in the afternoon, with winds from the NE at 5-15 mph. Inland ponds were frozen, and moving water was partly/mostly open. Lake Erie was open, but ice flows were pushed into shore, leaving many of the gull and duck spp. to move farther out. Highlight birds of the day included 125 Bald Eagles, 8 Great Egrets, 2 Rough-legged Hawks, an Eastern Towhee, and 10 Pine Siskins. A Snow Goose was my highlight bird and earned me a shiny dime (Thanks, Scott!). Mollie Wood had 22 Wild Turkeys in her yard this morning, but we're unable to count them in our totals. The following is my account of the day's birding:

5 am - I parked at the end of the trail next to the boat launch at Sterling State Park in Monroe. It was snowing, and winds were blowing from the NE at ~10 mph. After repeated attempts at calling in a Screech Owl (and Great Horned Owl) w/ the iPod, Iwas getting nothing. I gave it an hour.

7 am - I had no luck owling, so headed south to the J.R. Whiting Plant in southern Monroe Co. I would be birding the shore of Lake Erie this morning w/ Allen Chartier, Will Weber and Scott Jennex. Scott and I would then head to the Monroe Power Plant at noon. 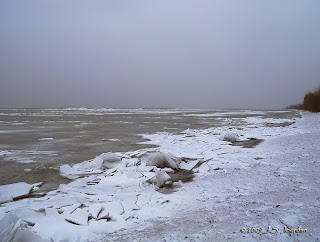 As we started our morning it was still snowing, and the winds were constant at 10-15 mph NE. It did not really get light enough 'till 8 am to see anything, so we had to wait. The shoreline was coated w/ an inch of snow, and the winds had blown ice into the bay. Though it was still dark, we could tell that there were very few birds around.

Through the snow and wind visibility was poor, but as daylight increases we began to make out small rafts of scaup, Mallard, Black Ducks, Common Goldeneye and Common Mergansers. A few Herring Gulls were about, and a significant flock of Canada Geese were visible to the north. As we headed toward the warm water discharge to the south we began to see a few Great Black-backed Gulls and several Lesser Black-backed Gulls.

We approached the growing flocks of birds slowly, but suddenly everything lifted off the ice. The first Bald Eagle of the day flew in low over the ice and scattered the birds. With few birds now to scope, we headed up the bank to the service road along the east shore.

The discharge canal held about 100 Mallard, but we were able to spot a pair of Hooded Mergansers, and at least three American Coot. A Great Blue Heron was tucked into the overhanging phragmites. 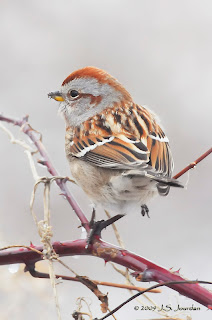 The road to the south toward Woodtick Peninsula yielded few birds. We managed to scare up a couple dozen American Tree Sparrows a couple of Song Sparrows, White-throated Sparrows, Northern Cardinals and Downy Woodpeckers. The inland ponds were frozen, and Great Blue Herons were unusually scarce. Allen heard a fly-over Horned Lark, and I was able to hear its 'tsid-ip' flight call. We managed only a few more gulls, including a single GBB Gull, and soon retreated south down the hill toward the peninsula.

As we walked a Muskrat appeared on the ice ahead of us. It took little notice of our presence, so I stopped to digiscope it. The guys were teasing that it looked an awful lot like the fur hat I was wearing... Though we'd hope to scare up a few Swamp Sparrows, there were none to be found. With few birds on the water we soon headed back north toward the plant and the cars.

We again scoped the discharge canal but found nothing new. We did hear our first Carolina Wren from somewhere within the phragmites. Near the outlet a small raft of Greater Scaup swam toward shore, and I began to digiscope them from up above. A few Lesser Scaup and a single Canvasback were among them. 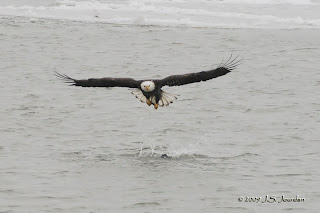 Suddenly, Will and Allen watched as a Bald Eagle chased an American Black Duck over the ice and toward them. As the birds reached the edge of the ice shelf and open water the eagle, flying below the duck, swooped up and swiped at the duck. It missed, but the duck flopped into the water. With the duck isolated the eagle continued its attack. The eagle hovered and swooped several times as the duck dove beneath the surface to avoid capture. From the photos I took of the eagle we could determine that it was probably a 3rd-year bird: it had a white tail w/ feathers tipped with a distinct black band. After several more unsuccessful passes at the duck, the eagle retreated to the ice shelf to rest. The duck retreated toward the group of scaup near shore, and I managed a few digiscoped images of it. I could tell it was scared! Three more eagles flew in moments later to join it. This is a composite of one juvenile bird. We concluded that there must be at least 8 eagles in the area. With it getting close to 11 am Scott and I left Allen and Will to bird the Lady of the Lakes Woods and headed toward Monroe Power Plant. 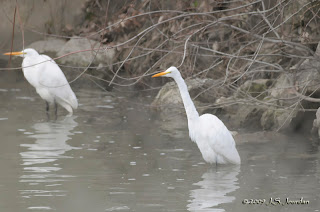 Noon - Scott and I arrived at the Monroe Power Plant to meet Matt Schackelford, Tim Walsh, Don Burlett, Mike McCullough, and Jane Van Kirk at the power plant. We arrived to news of at least 10 Bald Eagles. While we waited for the rest of our group to arrive Scott spotted 3 Great Egrets along the discharge canal nearby. We walked over to the bridge and counted 7 birds scattered along the shoreline. I took numerous photos of each bird, knowing that documentation would be required. I was able to put a composite image together of all seven birds. We would later spot an eighth bird at the mouth of the canal. 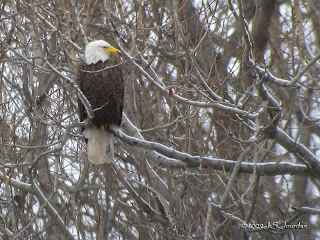 Piling into two vehicles we headed down the trail along the warm water discharge and counted dozens of Bald Eagles and Great Blue Herons lining the far shore and trees. Gulls were spotty along the canal, and only Ring-billed Gulls were present among the few dozen birds we counted.

Although we tried, we couldn't find any Bonaparte's Gulls. 150 Mallard were in the frozen pond to our left, along w/ several Black Duck and dozens of Canada Geese. Don found a drake Gadwall through his scope. 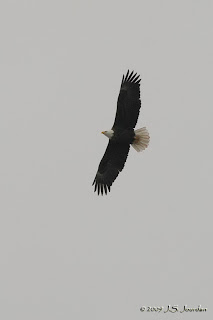 The Raisin River was mostly fenced-off due to security issues, but we managed to find another half-dozen eagles, and 8 Hooded Mergansers. Common Mergansers were nearby, as well. The lake shore was surprisingly absent of birds, mostly due to the loose ice flows. It wasn't until we drove a half-mile toward the discharge canal that we came upon a large flock of Herring Gulls on the ice. Fly-by flocks of scaup and mergansers broke up the monotony of scattered gulls. 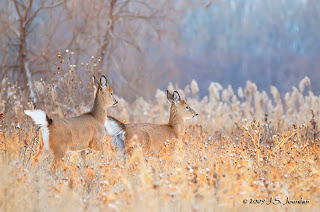 As we continued on Matt spotted a half-dozen White-tailed Deer hiding in the grass. I grabbed a few pics from the truck as they bounded off into the woods. 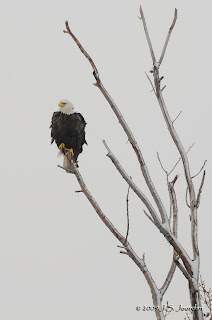 An adult Bald Eagle perching along the near shore provided an opportunity for some digiscoping. A nearby juvenile bird perched nearby flew off before we could get close enough to photograph it. 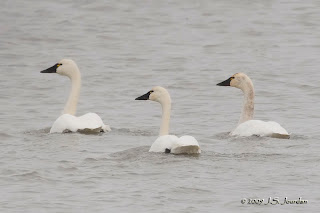 We drove over to the fly-ash onsite and checked the grasslands and burms for Northern Harriers (none) and sparrows (few). Scott managed to find a hovering Rough-legged Hawk. When we drove over to the lakeshore near Bolles Harbor we heard, then saw a large flock of several hundred Tundra Swans swimming among another couple hundred Canada Geese. How I managed to find a Snow Goose among them I'll never know, but luckily one was swimming amid a group of Canada Geese that were separated from the rest of the swans. With attempts to call in a Great Horned Owl w/ the iPod a failure, we packed up and called it a day.

5 pm - We met at the Michigan Bar and Grill and tallied results. Despite the weather we managed some nice results: 77 Species and 91,000 birds. Highlights of the count included a Snow Goose, an Eastern Towhee, 125 Bald Eagles, 8 Great Egrets, 2 Rough-legged Hawks, and 10 Pine Siskins. Area totals are shown here. 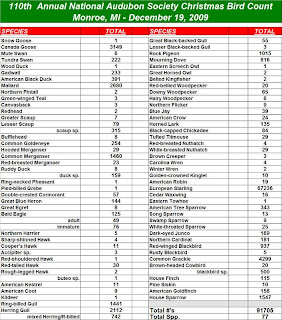 As always, I'm grateful for all who participated in the count. Thank you, all!

Merry Christmas and Happy New Year!
Posted by Jerry Jourdan at 6:33 AM No comments: 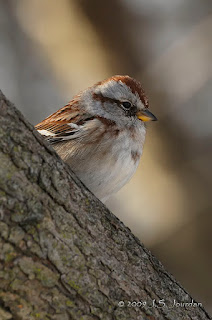 
For more information about the count, see the menu (at right).
Contact Jerry Jourdan @ jourdaj@gmail.com if you wish to participate.
Posted by Jerry Jourdan at 5:39 PM No comments: