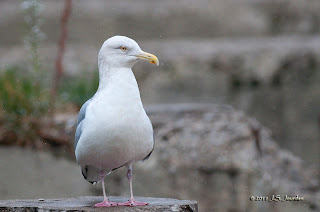 Saturday, 17 December 2011 marked the 42nd Monroe, MI Christmas Bird Count in conjunction with the 112th National Audubon Society CBC.  A week of heavy rains, and today's constant snowfall resulted in unusually low numbers of birds (63,078).  But we managed 76 species, which included two Count Week birds: Pacific Loon and Turkey Vulture.  If the Pacific Loon is accepted it will be a first CBC record for Michigan!  Thanks to Jan Morrow for finding the bird and documenting its presence on days 1 and 3 of the CW.

As for me, my day started at 3 am with a rude awakening by the alarm clock.  Out the door by 4 am I headed south toward Monroe, but not before stopping by Roberts Rd. and Pt. Mouillee to see if I could call in a Screech Owl or two.  Within minutes of getting out of the car I managed to call in two birds, neither of which I could find w/ the flashlight, so no photos could be taken.  A moment later a 3rd Screech Owl started calling from nearby, but then all three ceased.  They must've flown off?

I headed back to the car and drove down to Sterling St. Park, where I parked at the back of the boat launch and proceeded to call in another Screech Owl.  It took about 20 minutes, but I was finally successful in bringing a bird that (again) eluded my flashlight.  It finally flew off to parts unknown, and I headed in to Monroe for a quick breakfast before heading off to the Whiting Plant for the day's count. 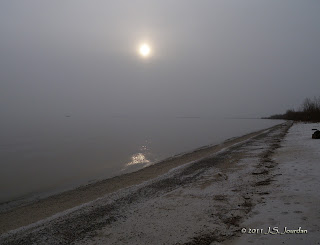 At 7am I met Tom Schlack, Allen Chartier and Will Weber, and the three of us headed down to the Lake Erie shoreline to wait for the sun to come up.  Temperature was 31ºF, and winds were calm.  We were expecting snow showers later today, but for now skies looked to be clear.

As we waited for the skies to brighten we were suddenly startled by the belting sound of a Winter Wren calling just feet away from where we were standing.  In this technology-driven world the immediate response was to reach for our smart phones, thinking that someone was calling us using a special ringtone.  When a second Winter Wren called neared the woods, however, we realized that it was the real thing.  Moments later a Carolina Wren serenaded us w/ its distinctive call.  I walked over to the fence surrounding the Lady of the Lake Woodlot and heard a third Winter Wren.  And suddenly they were gone!

The morning light grew, and we soon could make out rafts of Lesser Scaup several hundred strong, followed by smaller rafts of Common Goldeneye.  As we scanned the lake the first Great Black-backed Gulls appears, followed by Lesser Black-backed Gulls, and scads of Ring-billed Gulls.  But the dimming sunrise meant that snow was headed our way, already, and within minutes we started seeing the flurries that would not let up for the rest of the day... 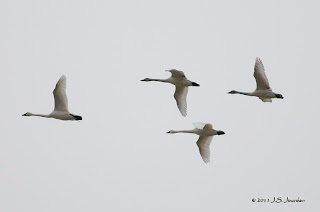 We were soon met by Mark Wloch, who had seen a pair of Black-crowned Night Herons in one of the ponds next to the power plant.  We headed up the banks to walk the property, and found a Belted Kingfisher and a Wood Duck tucked back under the shoreline branches of the pond, but little else.  A walk through the fields south of the plant yielded a fly-over flock of Tundra Swans, followed later by a lone adult Peregrine Falcon.  Having walky-talkies w/ us helped to make sure everyone was on the bird as flew over. A large flock of Gadwall in one of the rear marshes, and a total of 6 Bald Eagles was about the only other notable sightings the rest of my morning.  Dark, overcast skies and falling, melting snow meant another CBC of poor photography opportunities. 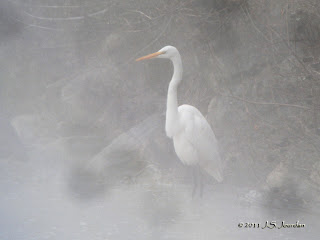 After a late-morning lunch w/ Robin at McDonalds, I headed over to the Monroe Power Plant, where I met Matt Shackelford and Tim Walsh, Carri Dyl, Steffen Dyl (her son) and his friend Andrew Smith.  Tom Schlack arrived and the seven of us proceeded to bird the grounds.  A pair of Great Egrets along the shores of the warm-water discharge canal was a nice start, and we spotted the first of dozens of Bald Eagles lining the shoreline trees.  Surprisingly, gulls were in short supply along the entire discharge canal, so it was easier to count the Great Blue Herons and Double-crested Cormorants lining the shoreline. 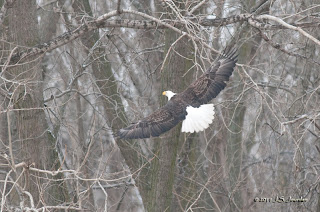 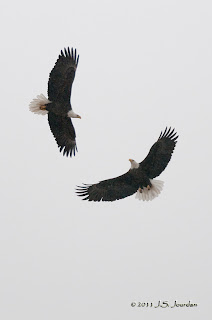 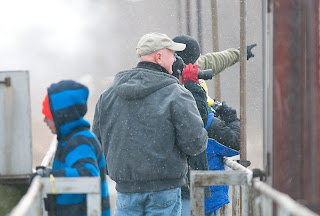 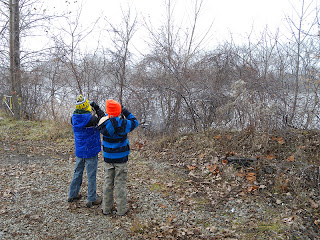 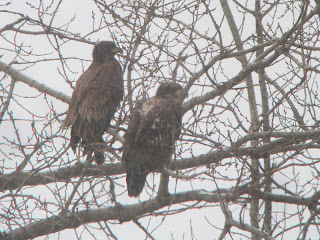 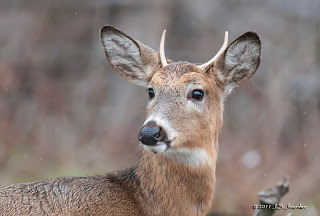 Steffen and Andrew soon discovered the resident deer population and began to keep personal totals of all the deer seen today.  They were kept busy.  Deer were everywhere.  And relatively tame due to (presumed) feeding by the plant workers. 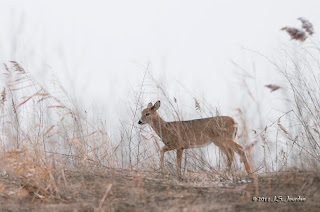 However, they were much more wary (and numerous) at the fly-ash onsite, where we counted hundreds of deer in the fields below the burms. Our only other highlights of the day were 48 Bald Eagles, 15 Great Black-backed Gulls, and 2 surprising Lesser Black-backed Gulls.

Other highlights from other areas included:

- A Red-headed Woodpecker heard by Allen Chartier in the woods next to the Whiting Plant
- A Merlin seen Dennis and Kathy Rohmeyer, Amy Hall and Nick Duvall (and photographed by Amy) in Area 3
- A dark-phase Red-tailed Hawk seen by Anne Smith, Rita Montague, Jacki Copeland, and photographed by Karen Hall in Area 5
- A flock of 185 American Robins, and a single White-crowned Sparrow in Area 6 (Jack and Janet Volker)
- A count week Turkey Vulture in Area 7 (Raisin River near Raisinville Rd), reported by Bob Pettit
- 3 Great Horned Owls and 30 Horned Larks in Area 8 (Joe and Terri Janssen, Nick and Rose Assenmacher, and Ray Rose).

Of special note is the count week sighting of the Pacific Loon by Jan Morrow in LaSalle. Jan first spotted the loon swimming in Lake Erie outside here window on Wednesday the 14th, and again on the 16th.  Although we tried to get photos, the bird remained elusive, and was not seen on count day.  However, we're hoping that her documentation will be accepted as the 1st CBCrecord for the State of Michigan.  We are presuming that this is the same bird that has been seen since late November at Sterling State Park. 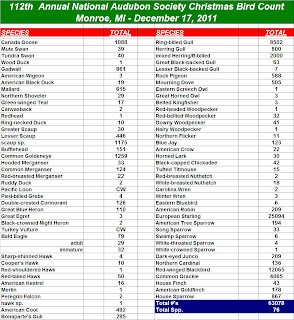 Many thanks to all who participated in the day's count.  Additional images from Bob Pettit, Amy Hall and Karen Potts are below:

Posted by Jerry Jourdan at 9:36 AM No comments: