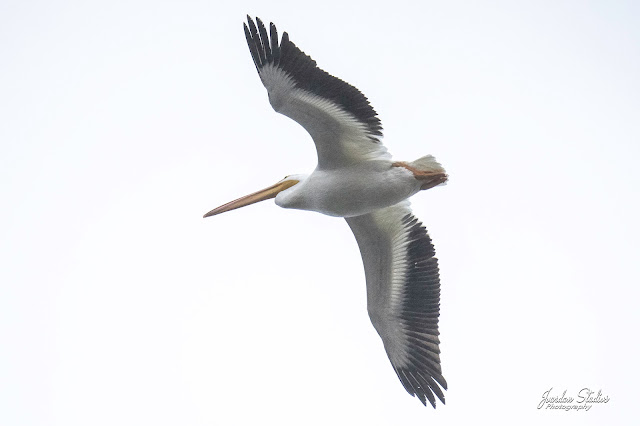 "MI" is short for MISERABLE.

24 hours ago the temps were in the mid 40's and the Sun was shining. Then, overnight, the temperature dropped and the rain came. And it did not let up. At 8 am I was sitting in the car at Luna Pier waiting for the rain to slow just enough to get out and quickly scan the lake for gulls and ducks. At 1-2 degrees above freezing the pelting rain hurt.

When it finally slowed I scoped Lake Erie and found an impressive raft of 750+ Common Goldeneye while another 260 Red-breasted Mergansers flew in to join them. The ducks were close enough to the breakwall to tempt some digiscoping, but waves crashing over the breakwall quickly cured that temptation.

I was patrolling random areas during the morning hours while I waited to bird the Monroe Power Plant at noon. So, after Luna Pier I headed north toward Sterling State Park to look for the American White Pelican flock that had been reported on 14 December but not seen since. But first, I stopped at Bolles Harbor and kicked up a pair of Bald Eagles. Then, a short drive down E. Dunbar Road yielded 3 Wild Turkeys before I ran into Dave Mendus and Anne Smith who were patrolling Area 5. 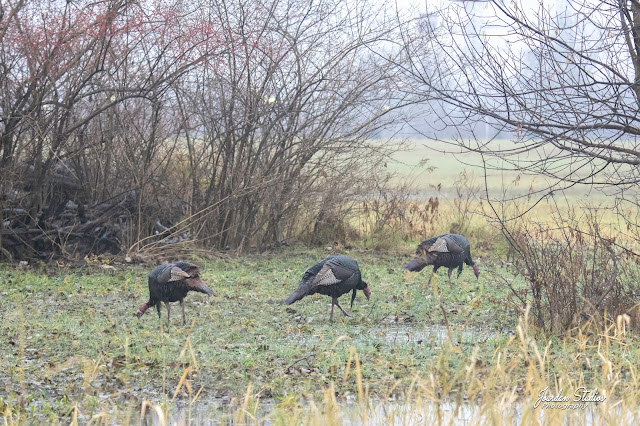 I stopped by the foot of Elm Street and ran into a flock of 50 American Robins next to the Ford Warehouse. White-throated Sparrows, American Tree Sparrows, Northern Flickers, and a Carolina Wren finally gave me something to photograph as the rain started to let up. Nearby Union Camp Marsh was flooded but held 100+ Gadwall swimming as a large raft while dozens of Bonaparte's Gulls fluttered over the water and flashed their bright white wingtips. 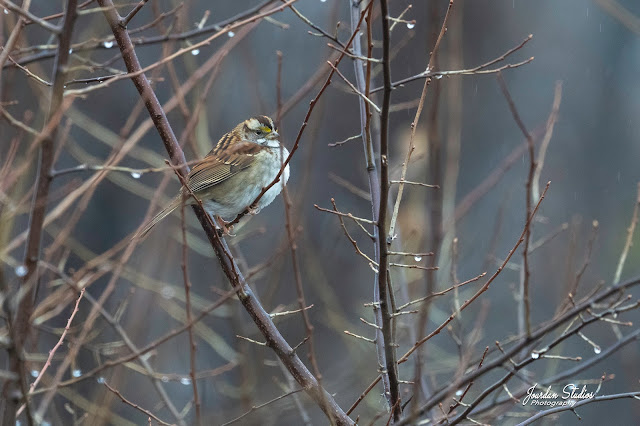 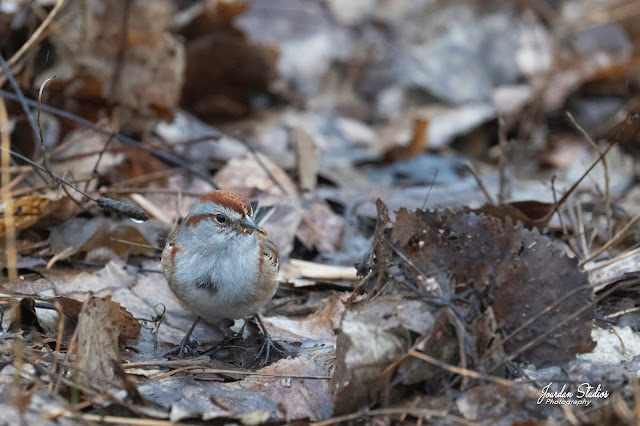 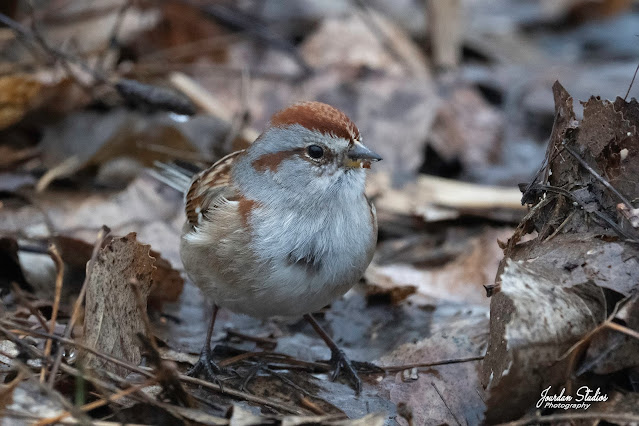 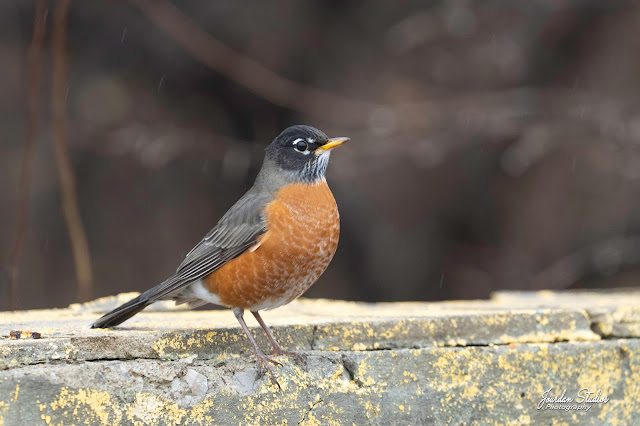 I was happy to see the hundreds of Hooded Mergansers at Sterling State Park but saw no sign of pelicans. I hoped that Jack and Janet Volker were faring a little better as they were doing the official count for the State Park. 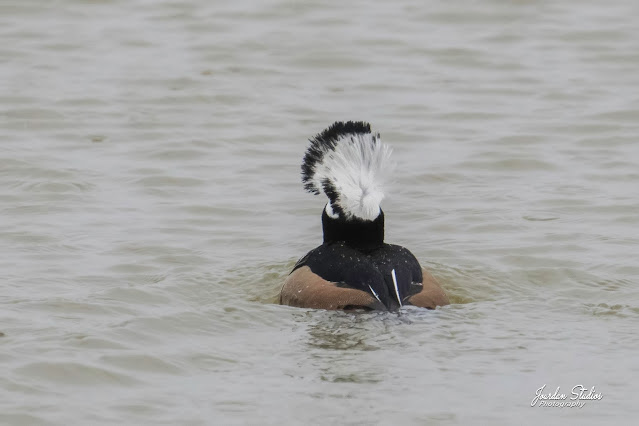 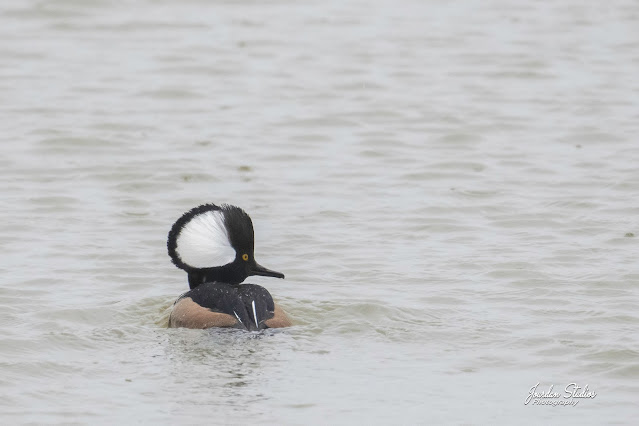 I had hoped that the rain would stop by noon, but it continued to fall even as I pulled into the little lot next to the DTE Energy Monroe Power Plant. All I could do was count the 250 Double-crested Cormorants and look for roosting Black-crowned Night Herons, but found none. I was consoled w/ a single Great Egret at the north end of the channel and a roosting Belted Kingfisher on the railing overlooking the warm water discharge. 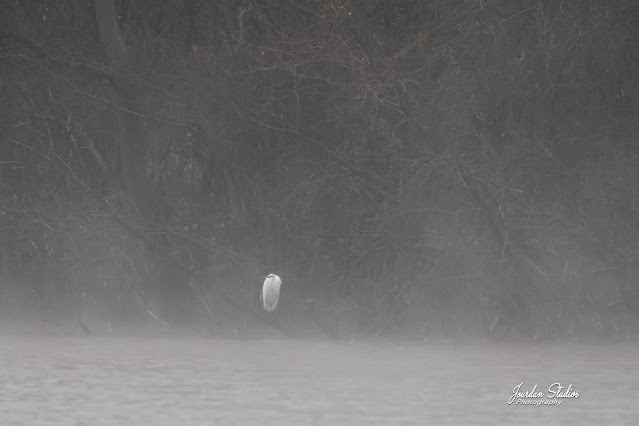 I met Mike Kozlowicz, process engineer for DTE, who was gracious enough to escort me around the plant despite the miserable weather conditions. After not being able to survey the plant in 2020 (due to Covid) I was grateful that I was allowed in this year.

We drove the plant perimeter and found scattered Bald Eagles along the Raisin River shoreline. We stopped only briefly to look for ducks on the river and out on Lake Erie, which was void of any bird life. The rooftops next to the coal piles held almost 2-dozen Great Black-backed Gulls, so things started to look up. More Bald Eagles were scattering from the trees ahead of us, but otherwise things were quiet. 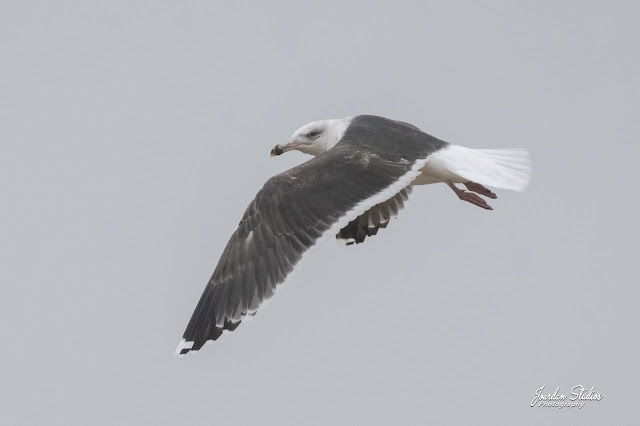 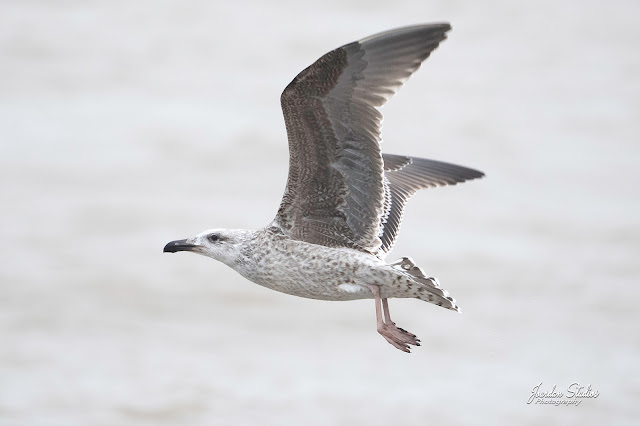 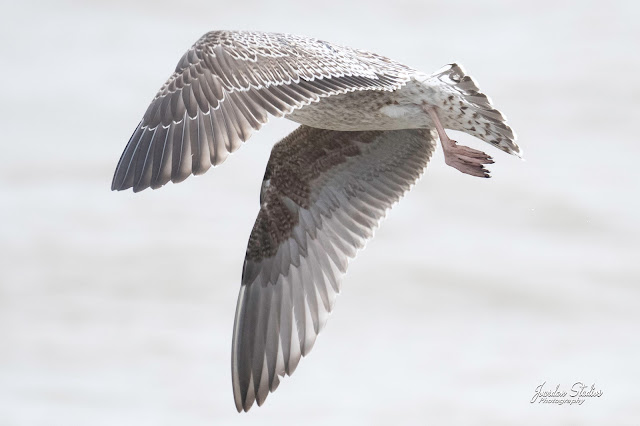 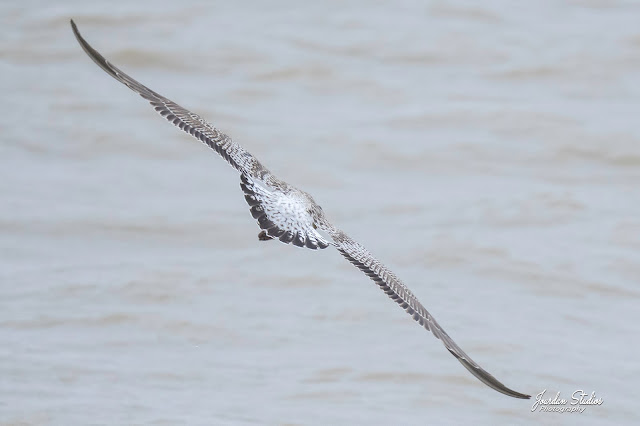 At the mouth of the warm water discharge I spotted a dozen large white birds lifting off the water and disappearing into the fog. Too large to be gulls they could only be American White Pelicans! After all, Mike had seen 6 of them just yesterday. While we continued to survey the plan was to loop back around to the other side of the bridge and look for them in hopefully better light. In the meantime I concentrated on counting Double-crested Cormorants and Bald Eagles (87 total inside the plant proper). 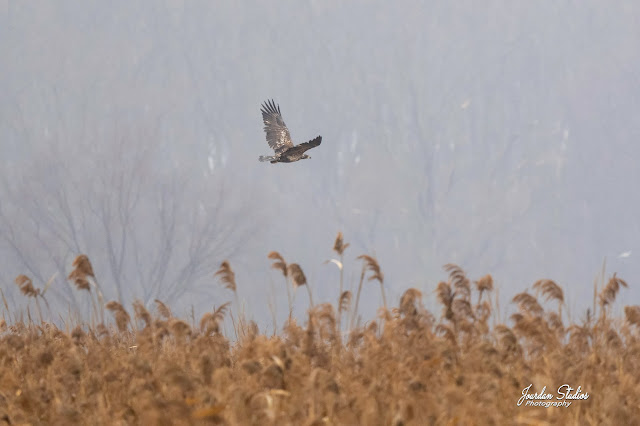 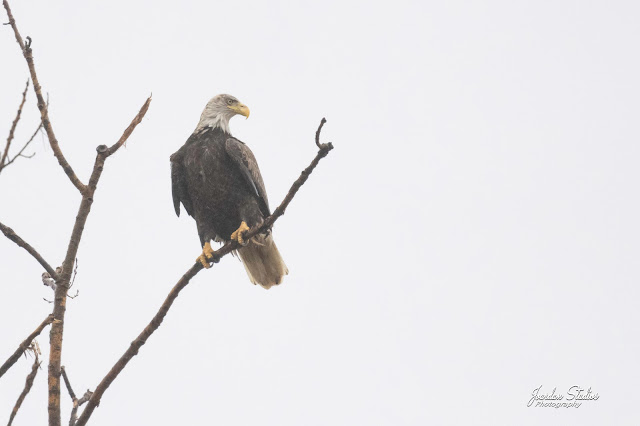 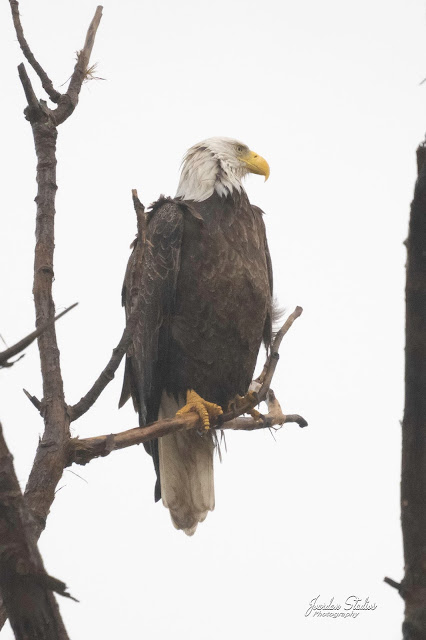 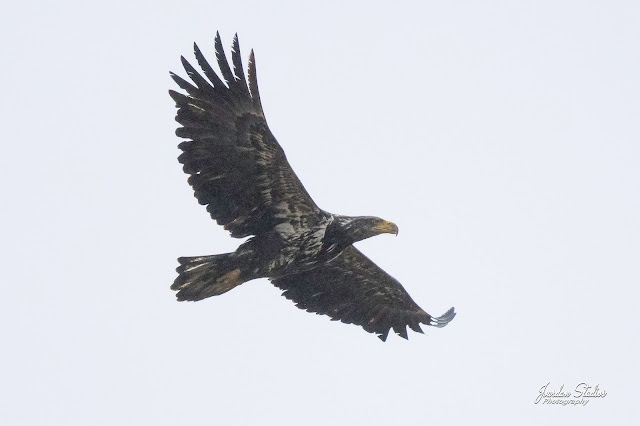 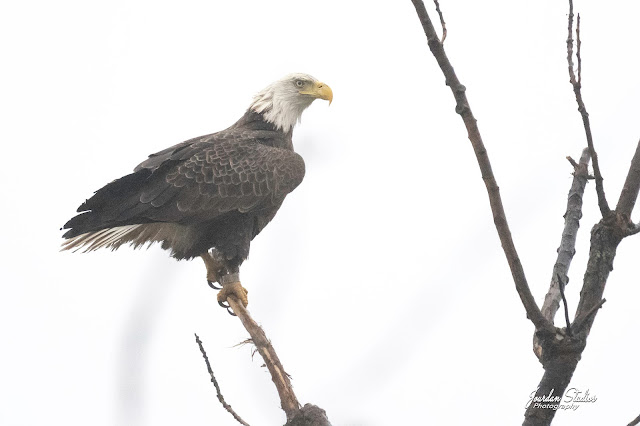 As we counted clusters of Bald Eagles (5 - 15 at a time) in the trees along the shoreline a large flock of American White Pelicans appeared overhead. Now numbering almost 2 dozen I was thrilled to finally get some pics as they soared overhead. When we finally reached the entrance to the plant the flock now numbered 42 birds forming a large V. Later in the day someone would report 60 birds back at Sterling State Park. 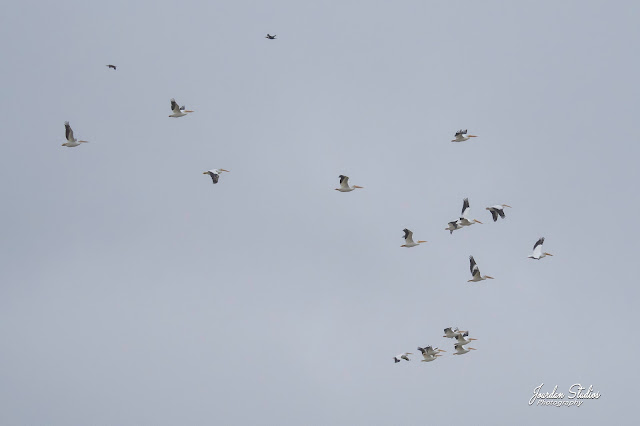 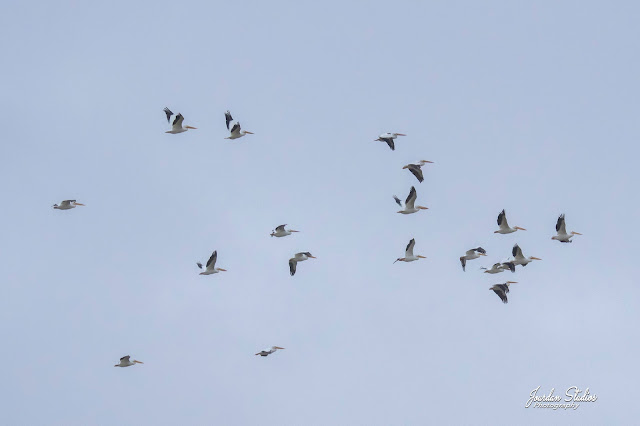 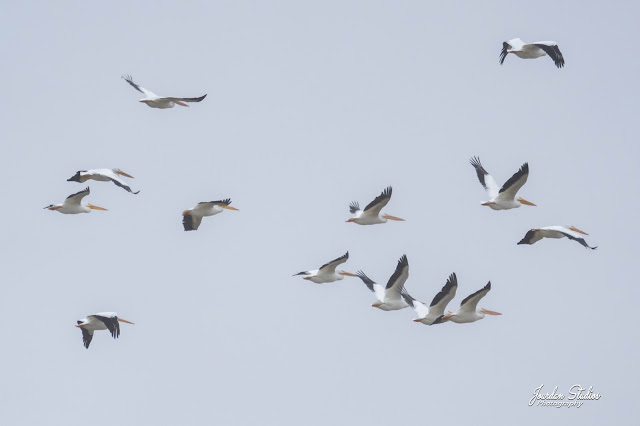 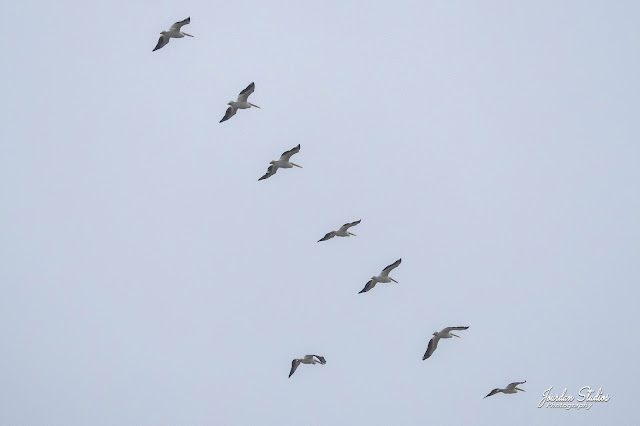 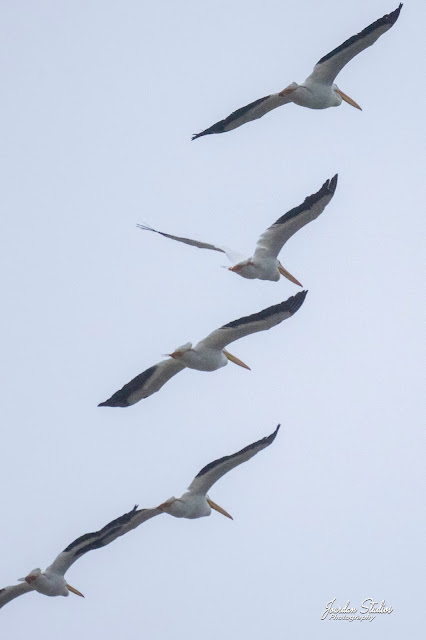 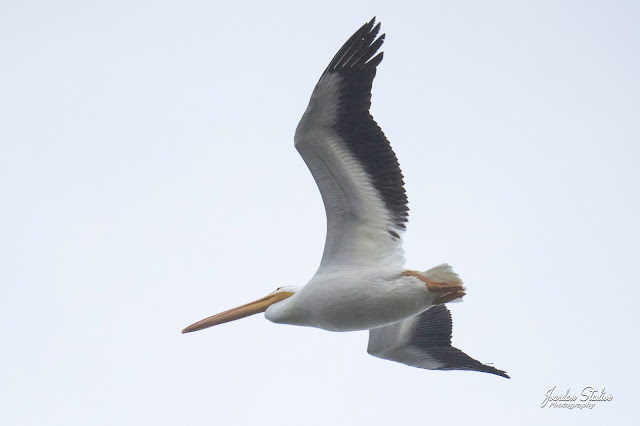 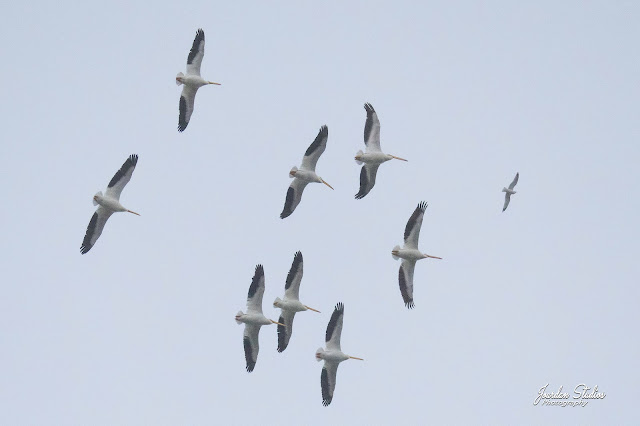 Although the fly-ash Onsite yielded few birds it was neat to see that the road was paved for trucks to more-safely deliver fly-ash to the top of the burm. We'd finish by early afternoon, and would call it a day. Cold and soaked, I still considered the day quite successful.

Overall we would finish the 52nd Monroe, MI Christmas Bird Count with 75 species and 24,817birds. Surprisingly good diversity despite the few numbers of birds and MIserable weather.

Some highlights from the other areas:

Trumpeter Swans (8) outnumbered Tundra Swans (4) for the first time ever!

Allen Chartier, Guadalupe Cummins, and Spencer Vanderhoof had 813 Common Mergansers at the foot of Erie Rd. (former JR Whiting Plant). This was as far north as the mergansers reached this year; Red-breasted Mergansers were concentrated farther north in Luna Pier and Sterling State Park areas. They, and Will Weber, would finish w/ 54 species that also included 3350 Common Goldeneye, 7000 Red-winged Blackbirds, another 500 Common Grackles, and a Ruby-crowned Kinglet at Erie Marsh.

Dennis and Kathy Rohmeyer had the only Tundra Swans (4) of the day in Area 3.

Bob Pettit and Brant Georgia had to console themselves w/ Cooper's Hawks (2), Red-tailed Hawks (3), and American Kestrel during a slow day in Area 7.

John and Kathy Flora found the only Cedar Waxwings (20) in the county and reported the first Mallard (50) sighting in many years of counting Area 8.

Many thanks to these participants, and to DTE Energy for assisting in this year's Christmas Bird Survey. Hopefully, next year will bring better weather and birds. - Jerry Jourdan, Compiler, MIMO CBC. 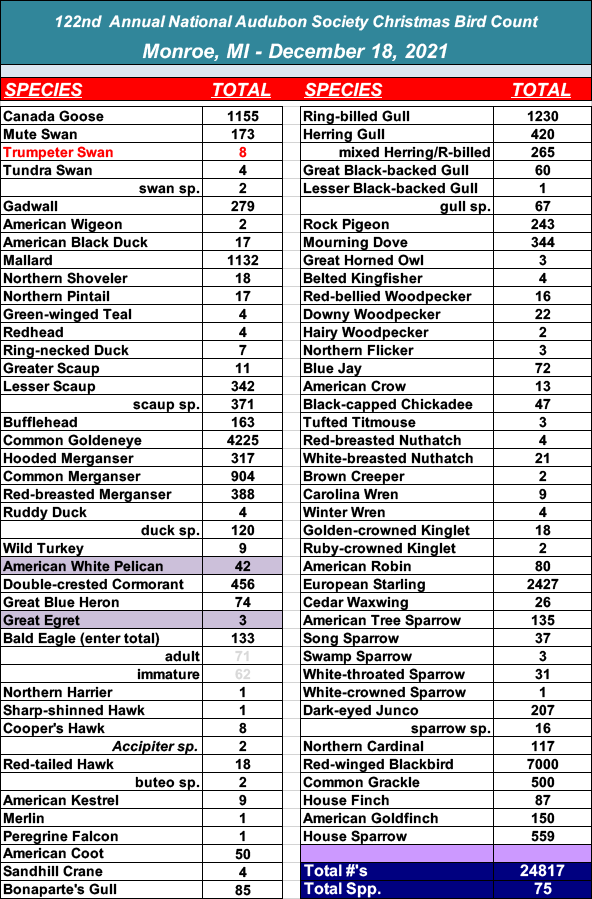 Posted by Jerry Jourdan at 5:00 PM No comments: